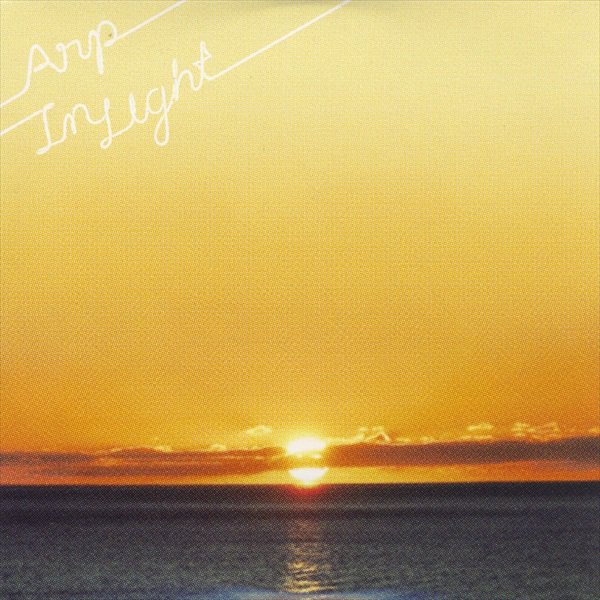 In Light is a luminous album of warm, pulsing music. It is music that may suggest a future that never arrived. Or, like the images that grace the cover and the booklet, it may rise and recede like drawn-up memories. Like dreams or rich, saturated moments that make one lose sense of time, they are grainy snapshots, like old films of one's own experiences, elevated moments. Call it Pop Minimalism. Call it Cosmic Pop. Call it Cosmic Minimalism. Call it what you will.

Arp is the most recent project of Alexis Georgopoulos, a San Francisco-based artist, writer and musician brought up in France, Greece and the United States. As a founding member of rhythmic experimentalists Tussle (Troubleman/Smalltown Supersound) and improvising collective The Alps (Digitalis/Root Strata), Alexis has toured the world and released critically acclaimed work.

In Spring 2006, after acting as primary songwriter, arranger & mixer of Tussle’s Telescope Mind, Alexis left the group. Soon after, Artforum critic & White Columns curator Matthew Higgs selected Alexis to take part in an exhibit he was curating at New Langton Center for the Arts. Inspired to try something new, Alexis put away the bass and drums and spent a few months improvising with analog synthesizers, pulse machines, flute, piano, pedals and an old 4track cassette recorder. Though presented as a demo, Smalltown Supersound founder Joakim Haugland were thrilled about the demo and asked Alexis to make a whole album for the label.

As an emblem of Alexis’ commitment to "natural electronic music” (bridging the natural and electronic worlds), nearly all of In Light was recorded live. Very few loops were used - in fact, only one. This gesture was meant to bring back some of the rough (re: natural) edges that  have been lost in so much "Electronic Music” today. The result, much of which was initially presented in that exhibition in collaboration with architect Kyu Che, is a vivid world of enchanted, elevated psychedelia that touches upon his love of everything from the 4th World explorations of Alice Coltrane to the Kosmische side of 70s Germany, from Soundtrack music to 20th Century Minimalist composition.

One may detect traces - in the elegant, rippling “St Tropez” for example - of vintage Cluster or Ralf & Florian. In the propulsive arpeggios of “…The Sculptor Steiner,” one may hear the influence of overlooked 70s Italian Futurist Franco Battiato or Taj Mahal Traveler Takehisa Kosugi. "Potentialities” recalls the suspended motorik pulse of Harmonia as well as the hypnopompic trance of early Terry Riley. “Fireflies On The Water” meanwhile, nods to the instrumental forays on Brian Eno`s “rock” albums. While drawing on these touchstones, In Light shows a commitment to originality in sensibility and vision.

In Light will be followed shortly by a 12" single with remixes by Panda Bear and the 70`s legendary kraut masters Cluster. Arp has also recently delivered a remix for Lindstrom (to be released on a 12” on his Feedelity label) and Charlotte Gainsbourg to be released by Vice Records.