Deathprod - Sow Your Gold in the White Foliated Earth - new album out 23. Sept 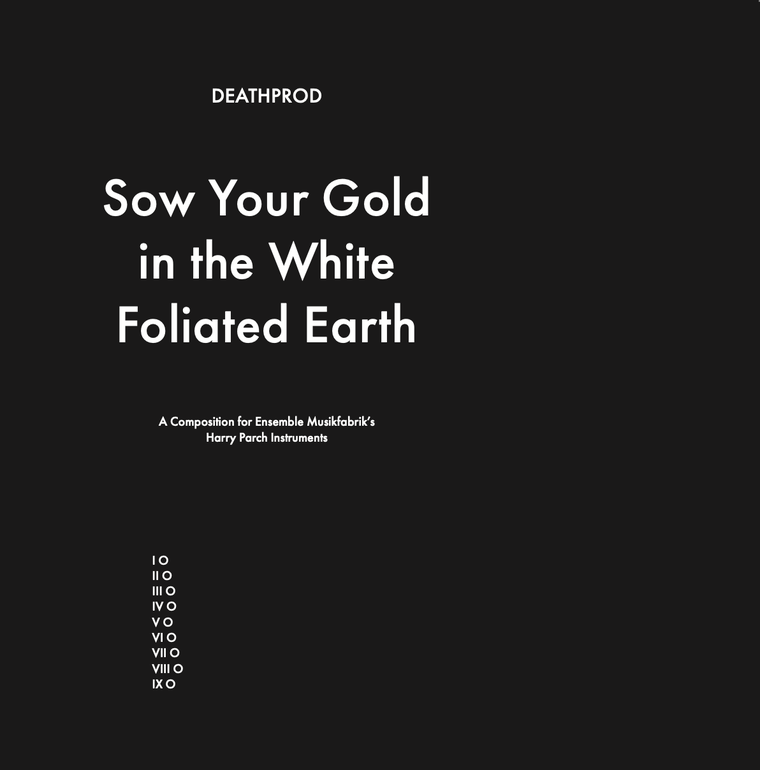 Sow Your Gold in the White Foliated Earth exists first as a curator’s fancy – in this case from Oslo’s Ultima Festival for contemporary music in 2014. The idea was to give revered Norwegian experimental electronic musician Helge Sten, aka Deathprod, access to seminal avant-garde composer Harry Partch’s self-designed, custom-made, specialized, invented instruments – an orchestra tuned to just intonation, using up to 43 intervals instead of the standard 12 for the most commonly used Western equal temperament.

An artist with a 30+ year career and an uncompromising reputation that reflects the emotional specificity of his uneasy, yet compelling sound, maintained throughout his expansive discography, Sten was an intriguing choice for such a project. Although he attended art school, training in electronic music and sound art, he had little experience with acoustic instruments and can neither read nor write music notation. Yet he’s been engaged with Partch’s music, and outsider art more generally, since he was a teenager. His resulting piece/composition for the project was originally intended only for performance by Cologne-based Ensemble Musikfabrik, for a series of concerts in five European cities between 2015 and 2018. It’s Musikfabrik that undertook the painstaking, expensive process of building an entire set of the composer’s creations – the second only to the originals built by Partch himself. They are the professional musicians and virtuosic instrumentalists that had to re-train and re-educate on these unknown and experimental sound sculptures in non-standard tunings. And they house this large, gorgeous physical instrumentarium and deal with the enormous logistics of working with it, sometimes shipping the fragile pieces to other locales via semi-trucks or ships.

Because of such monumental efforts, Musikfabrik are notoriously guarded with recordings of the instruments. And rightly so. They’re the only ones allowed to perform on them, too. But Sow Your Gold isn’t Musikfabrik playing. Instead, Sten spent days and nights alone with the instrumentarium in Cologne. He played the instruments himself while recording, layering the recordings and editing without effects to compose an ‘audio score’ for Musikfabrik to work from in order for the ensemble to perform the piece. (Partch also regularly worked this way, although he would transcribe afterwards. Likewise, Sten worked with a professional arranger to create a detailed score, too.) So, that makes Sow Your Gold an even less likely rarity – partly why its release comes seven years after its creation.

If you ask Sten about the album’s title, he’ll point you to the text he borrowed it from – Michael Maier’s Atalanta Fugiens by H.M.E. De Jong, a 1969 study of a 1617 book of alchemical emblems – and notable passages dealing with alchemy, chemistry, and agriculture, all transformative processes. And while that may sound complicated, his takeaway is simple: “You have to break something down to create something new,” – a lesson he felt related strongly to his own musical process, especially in this project.

So, while Sow Your Gold in the White Foliated Earth is a piece written for specific, oddly tuned, extremely rare and unusual instruments, and for a certain ensemble – namely, some of the finest contemporary musicians in Europe – Sten grew fond of the audio score, recognizing it as coming directly from the creative process in its purest, most natural form. And so from a foliated earth, where obscure tradition, treasured scarcity, immense effort, and patient certainty layer and criss-cross, comes rugged gold, polished to shining by one outsider for another.