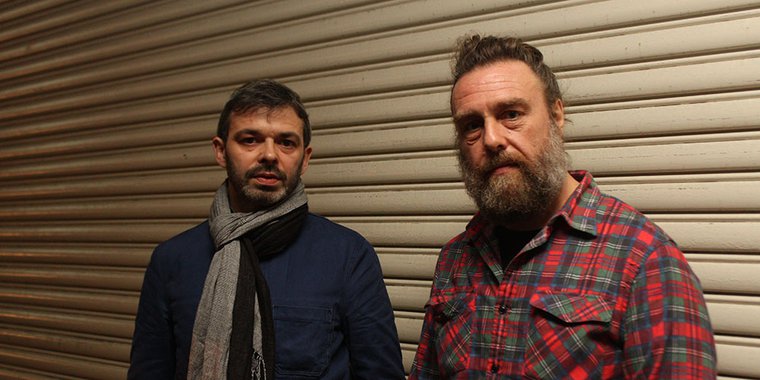 In a world in which trance DJs with names like Ferry, Armin and Tiësto plead for votes in the DJmag Top 100, it’s nice to know there are other, stranger, galaxies circling the more secular and mundane one in which we live. One such universe, Planet Idjut, is occupied by two otherwise unemployable characters called Daniel (Tyler) and Conrad (McConnell). It circles the other planets suspiciously, unwilling (or perhaps more pertinently, unable) to conform to the mores and habits of other mere mortals. They are, it is true, DJs just like the aforementioned Tiësto and company, but where most are happy to serve up a formulaic and entirely predictable menu to keep the happy E hordes of Ibiza content, the Idjut Boys play, as Conrad once quipped, “Whatever we can get away with.” That could include anything from 70s jock metallists Nazareth to Phil Collins interspersed with perhaps some Underground Resistance for light relief, swiftly followed by the Temptations, something which makes their DJ sets non-conformist, occasionally brilliant, sometimes floorclearing, but always interesting. They have been doing this for a smidgeon less than 20 years now, firstly as party-throwers at The Cross in north London and, more notably, as label bosses of the waywardly brilliant U-Star and Noid. The pair first met in Cambridge, Dan’s hometown, before moving down to London to pursue unfulfilling careers. Their studio break came thanks to a neighbourly benefactor who worked in the music industry. “We annoyed him to such an extent that he offered us the opportunity to go into a recording studio if we stopped playing loud music on a nightly basis,” chuckles Dan. “His girlfriend Sheena used to ram her way into our flat when we were really ripped, and remonstrate with us for playing our monotonous music.” That first studio session, as luck would have it was in Zeus B. Held’s Eastcote Studios, and his German engineer, unphased by the fact they had no idea what they were doing, guided them through the process that eventually yielded the first release on U-Star. Thanks to an affinity for a certain style of production, firmly rooted in dance music history but with the echo chamber and delay set to 11, their records made a huge impact in New York and launched their careers as travelling jocks. “We went to the Ministry of Sound to hear François K play and he had two copies of that single,” recalls Conrad “We weren’t doing anything that hadn’t been done a million times, but somehow it just worked out for us.” Despite the obvious temptations of showgirls, free drugs and helicopters crafted entirely from elves’ discarded surfboards, they have resisted the house treadmill on which so many other DJs of their generation trod. “We like house music and play some of it,” argues Conrad. “But perhaps one of the reasons we’ve continued to DJ is because we don’t do that. You can absolutely keep energy in the room and you don’t have to adhere to the same music or the same tempo. You can play anything, man. You just need to set it up.” If you’ve only got a two hour slot you play loads of high energy house music but then there’s this country and western record… Oh balls I’m gonna play it.” It’s this delightfully scattershot approach that has made them such a promoters favourite, particularly in Japan, where their brand of idjutcy has found a mutually appreciative home, and one where their preference for lengthy sets (there are two of them after all), is appreciated and nurtured. Amazingly, despite a 20-year career they have never produced an artist album. Until now. Those expecting formulaic disco-not-disco floorscreamers will be disappointed. Many months in the making, many collaborators in its gestation, this is what the Idjut Boys sound like strapped to an Eames chair, cheroot in hand, while their pet tiger Keith sits by the hearth fire. “What we’ve tried to do is make an LP, four tracks a side on vinyl,” reports Conrad. “You stick it on your stereo, have a cup of coffee and read the paper. When it’s finished you stick the other side on. So we’ve made an LP in the traditional way.” Although the album was made with the armchair rather than the podium in mind, their approach to musicmaking as not altered at all. Although neither plays an instrument, they use the mixing board as their Stratocaster or Rhodes, often adding effects live as the song plays. “We do lots and lots of versions and mixes,” says Conrad. “Then we edit stuff from one into another. We try and use as many different sound sources and lots of different musicians. We’ve tried to make this sound as good as possible, so we’ve gone all over the place recording things, like Oslo for Bugge Wesseltoft’s piano, our friend Andy Hopkins’ for the drums and guitar and writing with Sally and Steve from A Man Called Adam in Cornwall.” If this gives you the impression the duo have settled down, bought themselves knitted Arran sweaters, flutes and a subscription to Wallpaper*, you’d be wrong. Although the Idjuts are keen for the album to be a listening experience, they are already champing at the bit to start making dance versions (a “drum and bassy dub” of ‘Going Down’ is already in the can). “Hopefully enough of them will buy the LP and think, “Yeah I don’t mind wasting some more money on you fucking idiots.” Or Idjuts, as the case may be. (Bill Brewster)